Minerva Foods is one of the South American leaders in the production and sale of fresh beef and its byproducts, as well as live cattle exports, and it also maintains operations in the beef, pork and poultry processing segments. The Company operates 25 slaughterhouses, 11 of which in Brazil, five in Paraguay, three in Uruguay, five in Argentina and one in Colombia, with a combined slaughter capacity of 26,380 head of cattle per day. It also maintains a meat processing plant in Brazil – Minerva Fine Foods and two proteins processing plants located in the cities of Rosário and Pilar, in Argentina which are part of the Swift Argentina band, with capacity to process 162 and 55 ton/day, respectively. The Company exports to more than 100 countries in five continents through thirteen sales offices and operates 14 distribution centers, 9 of which in Brazil, one in Paraguay, two in Chile, one in Colômbia and one in Argentina.

The Company’s 26 production units, as well as Minerva Fine Foods, are strategically located close to the main exporting ports and domestic markets, as well as its extensive network of cattle suppliers. The map below shows the geographical location of the Company’s industrial units and distribution centers, as well as its live cattle export office in Belém. 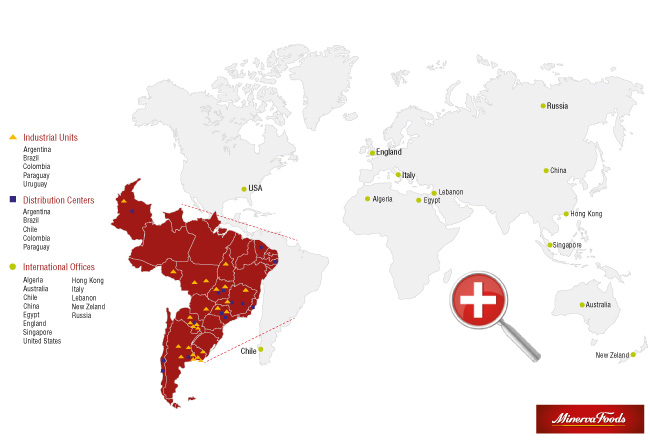 Minerva Foods has been maintaining consistent and sustainable growth throughout the years, and its history highlights its experience in purchasing and transporting cattle and the beginning of its operations in the beef industry.